If character is defined by what we do when no one is looking, then Art Pope’s character is defined by his philanthropic work over the past 25 years. With little fanfare, both personally and through the John William Pope Foundation, Art has given away tens of millions of dollars to organizations that seek to empower individuals, expand opportunity, and protect human dignity. 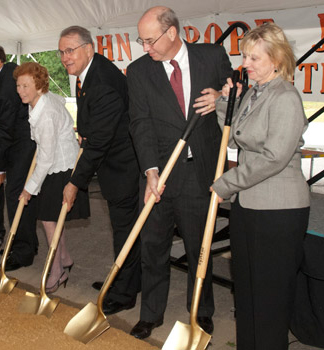 The goal is to help human beings flourish, to play a small role in providing greater equality of opportunity and the freedom to pursue those opportunities. Art’s philanthropic vision is rooted in meeting real human needs, both in the short-term, through humanitarian aid, and in the long-term, through liberty-oriented organizations that foster a freer, more prosperous society so that individuals have the opportunity to provide for themselves and their loved ones.

While Art gives to many organizations, the theme through all of them is freedom, opportunity, and prosperity. Whether giving scholarships to Eagle Scouts, founding public policy organizations, or supporting the arts in North Carolina, Art has been a largely silent force extending opportunity throughout the community.

The Pope Foundation’s giving falls into four major categories: Public policy, education, humanitarian, and the arts. The following are examples of grants for the 2014-15 fiscal year:

*Includes giving to multiple projects within the organization.