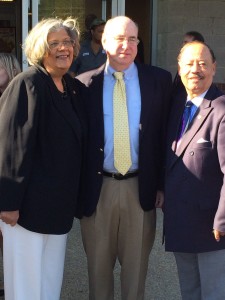 Several local representatives were on hand to mark the occasion including Rep. Yvonne Lewis Holley and Raleigh District Councilman Eugene Weeks.  Holley praised Variety Wholesalers for the social impact the store will have on Raleigh, noting that some issues were beyond politics.  She praised the number of jobs created and the effort Variety Wholesalers made to hire from the community.

At the grand opening, two separate $2,000 checks were presented to Inter-Faith Food Shuttle and the Salvation Army on behalf of Variety Wholesalers.

The news article below appeared online with the News & Observer on April 1.

A new Southeast Raleigh grocery store aims to fill a need for fresh, affordable food in a neighborhood where residents were left with few grocery options after a Kroger closed two years ago.

Shoppers toured Save-A-Lot after a grand-opening ceremony Wednesday, searching out deals on fresh produce, meat, dairy and other foods.

Lisa Toon, 51, said she’s relieved to see a grocery store return to the shopping center. Since Kroger closed, she’s had to drive past the empty building to get to the nearest grocery store and hasn’t been able to find groceries as cheaply as she would like.

“It will make life a whole lot easier,” she said as she and her husband, Ledell, pushed a cart with chicken, paper towels and eggs.

In late 2012, Kroger announced it would pull out of the location because of declining sales figures. Residents and elected officials said the move was a major loss and worried about how it would affect the neighborhood.

They especially had concerns about those without cars who have had to rely on several buses to get to the nearest full-service grocery stores about a mile away.

The median household income in Wake County is about $66,000, according to data from the U.S. Census Bureau.

At the store’s opening, Rep. Yvonne Lewis Holley, a Wake County Democrat, said the issue is not a political one.

“Guess what? When you’re hungry you don’t say are you a Democrat or a Republican,” she said. “Some issues exceed politics.”

In the state legislature, Holley has pushed to bring attention to the issue of “food deserts,” communities where families don’t have easy access to fresh, healthy and affordable food.

She said the new store also is important for the economic development it could help spur in the area by adding jobs and anchoring the shopping center.

The Save-A-Lot employs 27 people, and the Roses employs 70.

Variety Wholesalers officials have said the pairing of the Roses with a Save-A-Lot should encourage residents to make the trip to the shopping center, heading off the problems Kroger had in the location.

Customer Sharon Paige, 60, showed up to shop for groceries before the ribbon across the front of the building was even cut. She’s looking forward to buying household items at Roses, then heading next door to Save-A-Lot.

“You can do everything in one step,” said Paige, who said she may even walk to the store from her home in Chavis Heights.

Categories: In the Headlines, Philanthropy, Roses