From the John William Pope Foundation

RALEIGH, N.C. — At a press conference in Hendersonville, the John William Pope Foundation announced the winner of its first statewide competitive grant, the Joy Pope Memorial Grant in Human Services. The Dandelion Eatery, a project of Safelight Family Services (formerly Mainstay Women’s Shelter) received a one-time gift of $100,000 to expand its commercial teaching kitchen. Opened in 2013, Dandelion Eatery provides jobs training for domestic violence victims while operating as a restaurant open to the public. 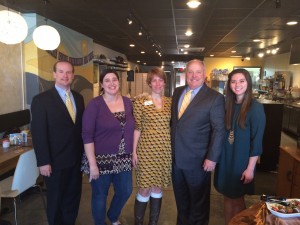 The Pope Foundation traveled to Hendersonville to award Safelight the $100,000 Joy Pope Grant in Human Services for their nonprofit restaurant, Dandelion Eatery.

“Ultimately, we were highly impressed with the innovative nature of the Dandelion Eatery project,” said Foundation Vice President Joyce Pope. “They saw a way to break the cycle of abuse by empowering their clients to be self-sufficient, and that goal has positive lifelong effects for individuals, families, and communities.”

Tanya Blackford, Director of Safelight, thanked the Pope Foundation for this gift. “We are grateful to have the Pope Foundation partner with us to expand the Dandelion program. This generous investment will allow us to offer job training internships to even more clients. Completing this program is essential to a victim’s long-term success in re-entering the workforce and being able to provide for her family.”

The Joy Pope Memorial Grant in Human Services was part of a pair of competitive grants offered by the Pope Foundation last fall. Over 60 applications were submitted for the prize named in honor of Joy Pope, wife of entrepreneur and philanthropist John William Pope. She was a dedicated patron of arts and human service organizations and served as president of the Foundation from 1986-1992. Her son, Art Pope, now serves as the foundation’s chairman which is based in Raleigh and has given more than $100 million since its founding.

Categories: In the Headlines, Philanthropy